With my growing coding skillset from learning at Scrimba, I created an arcade game website that includes game projects taught by them!

In this week's article, I document the creation of La Roc-Cade!

For the arcade website's logo, I once again worked with Design Desk, through Fiverr.

Design Desk created the logo for my blog, and my experiences working with them have been great. They have a talented and attentive staff, and I can highly recommend them.

I came up with the name of the website using my last name, Larocca.

For La Roc-Cade's logo design, I added the hyphen as a reference to the famous Pac-Man logo, and I had the "A's" in the logo modified to look like an Asteroids style space ship.

I added a Galaga-style star for the final touch but positioned it in a manner that makes the space ship-styled "A" look like it's shooting.

All rights reserved by Bandai Namco, Atari, Inc. and Namco

Directly underneath the La Roc-Cade logo is the slogan "GAMES."

I had this portion of the logo to be styled as a reference to "SPACE INVADERS."

All rights reserved by Taito Corporation

Note: The La Roc-Cade logo has not been finalized. The finalized version may differ from the one displayed in this article.

For my La Roc-Cade website, I wanted to incorporate a light & dark theme toggle switch.

Taking what I learned from Scrimb'a Build a color tool in vanilla JavaScript, I recreated and expanded on the light & dark theme toggle switch design.

In the Scrimba project taught by James Q Quick, we build a simple toggle switch.

For the Scrimba project, I created a Star Wars theme toggle switch that changes to a Rebel logo for the light themes and then turns into an Empire logo when switched to the dark theme.

All rights reserved by Disney and Lucasfilm

Here is a link to my scrim

How I created the Pac-Man toggle

When each theme is selected, Pac-Man eats the dots and shifts into the
new position.

I used a CSS "::after" Selector to create the "Pac dots."

I based the flipping game cards on a Scrimba Weekly Web Dev Challange, created by Michael Rybintsev.

To play a game, hover over the game card and click the "Play Game" button.

I designed the "Play Game" button to resemble an arcade quarter slot.

To select games to play, cycling through the carousel by clicking on the next and previous arrow buttons. 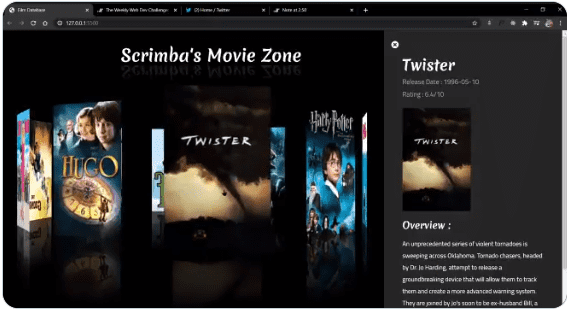 I originally wanted to create a 3d carousel similar to Palak's. I decided against it because it would not be a viable model to scale as I continue to add games to it.

To create the reflection, it actually only takes one line of code. However, it is not supported on all browsers.

To find out if the code that you are using in your projects is supported across a list of browsers, I use an informative website that is aptly called "Can I use."

You can go to w3schools website to learn more about -webkit-box-reflect:.

Classic arcade cabinets typically have a red light-up quarter coin slot. I loosely designed the "Play Game" button on this.

When you hover over the "Play Game" button, it lights up green to indicate that it is selected.

The final touch was to turn the mouse cursor into a quarter, so it gives the impression that you are inserting a quarter into the coin slot to play the game!

To learn more about creating custom cursors, watch this amazing YouTube video from the Code with Leanne channel!

I devised the carousel from two Scrimba projects. One carousel was from a JavaScripmas challenge created by Gary Simon.

The other Scrimba project was "Let's build a carousel from scratch" by Karl Hadwen.

I had to build, study, and learn how these carousels worked first to create mine successfully.

My carousel is different than the two that I learned on Scrimba. Mine shows multiple images at a time. Both of the Scrimba projects only showed one image and a time and hid the rest.

To create my carousel, I had to overcome three issues.

Issues I needed to overcome

Select all images and get the "left: px" value

To select all of the images and get the left pixel values, using a for loop, I used the getComputedStyle() method and assigned it to a variable named currentGameStyleLeftValue .

Increment and decrement each image "px" value by 400 respectively

I then had to change the pixel value from a string to an integer. To accomplish this, I used the parseInt() function and assigned it to a variable named currentGameValueParseInt.

Set boundaries for the beginning and the end of the carousel

Using the current left pixel value of the images, I can determine the beginning and end of the carousel. I only allowed the images to move when they were within my specified range.

Before writing and implementing this code, you can go past all of the images beyond the scope of the carousel, and they would all just disappear!

To give my carousel a unique feel to the movement, I decided not to use the standard transition-timing-function values.

Instead, I used cubic-bezier.com to create a customized bezier curve for my carousel animation.

What is a Bézier curve? Wikipedia states, "A Bézier curve is a parametric curve used in computer graphics and related fields. The curves, which are related to Bernstein polynomials, are named after Pierre Bézier, who used it in the 1960s for designing curves for the bodywork of Renault cars. Other uses include the design of computer fonts and animation."

To implement the custom bezier curve with my carousel, I wrote the following code and added it to my game-card class.

So far, I have created two Scrimba game projects that are available to play, Scrimba Snake and Star Wars Dice Duel.

As part of Scrimba's Frontend Web Developer Career Path, there is also a Pac-Man game that I will be creating and adding to La Roc-Cade soon!

While creating the first two Scrimba game projects, I documented and shared the process in two articles.

Scrimba Challenge: Dice Game - Make it your own

In creating this arcade website, I completed a milestone goal that I set for myself two years ago when I started taking web development seriously.

As my coding skillset develops, I plan on creating and adding multiplayer games, a high scoreboard, and more!

I want to thank the Scrimba community, which provided me with the education, guidance, and confidence I needed to make my "La Roc-Cade" project a reality.